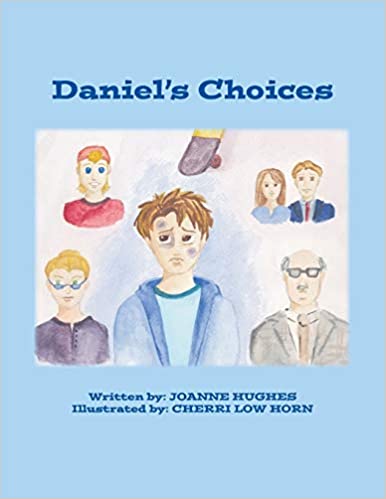 Daniel’s Choices is a one of a kind book that tells a story that may not be an easy one to read or hear about yet it is such an important story. Written about a young boy, named Daniel, that has been struggling at home and at school because of domestic violence in the home and contemplates ending his life at the age of 10. Hearing that young age might be quite shocking or unimaginable to think of yet Joanne Hughes has heard stories such as this over and over again for 25 plus years. Joanne worked in shelters for domestic violence for those years and she began to notice how many children came through the doors at the shelter that she personally met with, that had at one point or another thought about taking their life and 50 percent of those children had a plan. There are so many children and parents out there that are suffering in pain on a daily basis that think often about taking their life. It is my wish that this book finds it’s way into every school, library, after-school program, home, doctor’s office and psychology office.

Prioritize the most important thing in your life…you!

Obtain the tools you need to maximize your personal and professional relationships, make lasting positive changes in your life, reach your goals and give yourself the time you deserve.